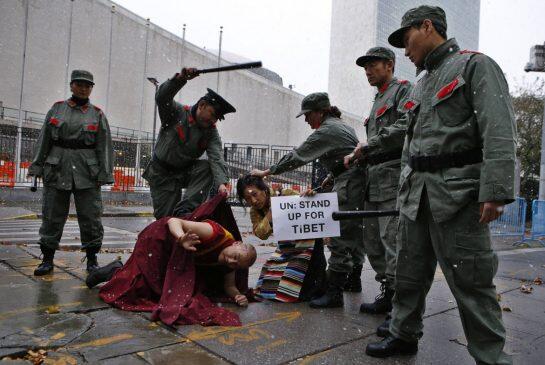 Alexander Solzhenitsyn described the Chinese rule in Tibet “more brutal and inhumane than any other communist regime in the world”. In the 1960s, the International Commission of Jurists found, after extensive investigations, that China had committed acts of genocide in Tibet. The United Nations passed three resolutions in 1959, 1961, and 1965 expressing their “grave concern” over the violations of fundamental human rights of the Tibetan people and stated that the Tibetan people were deprived of their inalienable rights to self-determination. Not with standing all these universal condemnations China continued its dubious rule in Tibet.

During the past half century, over 1.2 million Tibetans died in Tibet as a result of Chinese atrocities. Over 6,000 monasteries and the institutes of learning have been destroyed and precious artifacts have been vandalised and sold in art markets in Hong Kong and western countries. 60% of Tibetan religious and historical literatures have been burned. Tibetans are denied of the basic rights of expression, speech, movement, religion, etc. Tibetan women are subjected to forced abortion and sterilisation. Tibetan children are denied of their childhood and basic education.

Until 1949, Tibet was an independent Buddhist nation in the Himalayas which had little contact with the rest of the world. It existed as a rich cultural storehouse of the Mahayana and Vajrayana teachings of Buddhism. Religion was a unifying theme among the Tibetans as was their own language, literature, art, and world view developed by living at high altitudes, under harsh conditions, in a balance with their environment. The Dalai Lama, an individual said to be an incarnation of the Buddha of Compassion, had been both the political and spiritual leader of the country.

The turmoil begin with Chinese intrusion in Tibet dates back to September 1949, when Communist China, without any provocation, invaded eastern Tibet and captured Chamdo, the headquarters of the Governor-General of Eastern Tibet, on 19 October 1950. On 11 November 1950, the Tibetan Government protested to the U.N.O. against the Chinese aggression. Although El Salvador raised the question, the Steering Committee of the General Assembly moved to postpone the issue.

On 17 November 1950, His Holiness the Fourteen Dalai Lama assumed full spiritual and Temporal powers as the Head of State because of the grave crises facing the country, although he was barely sixteen years old. On 23 May 1951, a Tibetan delegation, which had gone to Beijing to hold talks on the invasion, was forced to sign the so-called “17 point Agreement on Measures for the Peaceful Liberation of Tibet”- with threats of more military action in Tibet.

The Chinese then used this document to carry out their plans to turn Tibet into a colony of China disregarding the strong resistance by the Tibetan people. On 9 September 1951 thousands of Chinese troops marched into Lhasa. The forcible occupation of Tibet was marked by systematic destruction of monasteries, the suppression of religion, denial of political freedom, widespread arrest and imprisonment and massacre of innocent men, women and children.

On 10 March 1959 the nation-wide Tibetan resistance culminated in the Tibetan National Uprising against the Chinese in Lhasa. The Chinese retaliated with ruthlessness unknown to the Tibetans. Thousands of men, women and children were massacred in the streets, and many more imprisoned and deported. Monks and nuns were a prime target. Monasteries and temples were shelled.

On 17 March 1959 the Dalai Lama left Lhasa and escaped from the pursuing Chinese to seek political asylum in India. He was followed by an unprecedented exodus of Tibetans into exile. Never before in their long history had so many Tibetans been forced to leave their homeland under such difficult circumstances.

Tibetan refugees are scattered all over the world with majority in India, Nepal and Bhutan. In India, they are rehabilitated in 22 agricultural settlements, 21 agro-industrial centres and 10 handicraft centres. In India, over 83 Tibetan schools have been established to educate the young Tibetans in both modern and traditional education. The establishment of more than 160 monasteries and cultural centres accommodates over 10,000 monks and nuns and assists in the promotion and preservation of rich Tibetan heritage and culture which faces imminent threat of extinction in Tibet under the Chinese occupation.

During the past 58 years in exile, Tibetan refugees have done well in preserving their own culture and identity. Many international aid agencies involved with Tibetan refugees regards the Tibetan case as one of the most successful refugee rehabilitation in the current world history.

Before the Chinese invasion, Tibet had the most successful system of environmental protection. Formal protection of wildlife and wild lands though parks and reserves were necessary as Tibetan Buddhism taught the people about the interdependence of all living things and the interrelationships among the whole spectrum of plant and animal life, human beings, as well as “non-living being” elements. People lived in close harmony with the nature.

Today, under the Chinese rule, the systematic destruction of environment of Tibet is unprecedented. The rich wildlife, forests, plants, minerals and water resources have all suffered irreplaceable degradation and Tibet’s fragile ecological balance is being seriously disturbed.

Research indicates that the Chinese authorities denuded some 54 Billion dollars worth of timber at the end of 1985 from the rich forest reserves of Tibet. In Amdo province alone, nearly 50 million trees have been felled since 1955 and millions of acres of forest area amounting to at least 70% cleared. A similar condition prevails in other parts of Tibet, particularly in eastern and southern Tibet. The massive and unchecked deforestation in Tibet is causing irreversible soil erosion and also increases the deposits of silt in the rivers, which in turn causes landslides and reduces potential farming land.

Since Tibet is the source of the major rivers in Asia, there is a serious threat to environmental conditions in South and South-Eastern Asia – as seen every year, the tragic floods in India and Bangladesh. The deforestation in Tibet also increased the risk of imbalancing the monsoon which then may herald disaster to Indian agriculture.

The large influx of Chinese population in Tibet has compelled the Tibetans to restrict their grazing land and thus in turn encourages overgrazing the available pasture land. The continuing practice of overgrazing results not only in dramatic reduction in the grass yield but also accelerates the desertification of whole of Tibet. This pattern will have serious effect on the global climatic condition.

The systematic and large-scale mining in Tibet began in the early 1960’s and has been continuing since then. Today, Chinese authorities are extracting over 126 different types of minerals in Tibet, which includes uranium and oil. The unrestrained exploitation of mineral resources in Tibet poses serious threat to the survival of the remaining rain forest in Tibet.

The flourishing wildlife of Tibet has been virtually wiped out by the Chinese. There were once bears, wolves, wild geese, ducks, blue sheep, antelopes, snow leopards, panda etc. Most of them have now become almost extinct.

One of the most alarming features of China’s present colonial policy is the large-scale, unprecedented transfer of Chinese population into Tibet. The real fear is that if the present Chinese policy becomes successful, Tibetans will be reduced to a small and insignificant minority in their own country, in the same way as the Manchus (35 Chinese to 1 Manchu), the Turkish people (3 to 1) and the Mongolians (5 to 1) have been. The object of this policy is to forcibly “resolve” China’s massive territorial claims over Tibet by means of a massive and irreversible population shift. The current policy began in 1983 as the “final solution” to China’s Tibet problems.

The encouragement of the Chinese civilian to settle in Tibet was admitted by Deng Xiaoping and other Chinese government officials. As a result of the implementation of this policy, today 6 million Tibetans in Tibet are outnumbered by 7.5 million Chinese. In the Tibetan province of Amdo, which is now turned into Chinese province called Qinghai, out of the total population of 4.45 million in 1990 (according to China’s own statistic) only 20% are Tibetans and rest are Chinese. The situation is even worst in Kham province where all the major towns like Dartsedo, Derge, Kanze and Markham are reported to be inhibited by 95 – 100% Chinese. Today, Chinese population in Kham alone is reported to be well over 3.6 million. The situation in U-Tsang (in the so-called TAR) in the Central Tibet is comparatively better. However, even in U-Tsang, Chinese have outnumbered the Tibetans in all the major towns and cities. The Chinese population in U-Tsang is estimated over 2 million.

Chinese occupation of Tibet has seen the Tibetan language surpassed by that of the Chinese. The government is repressing Tibetan culture by making the language redundant in all sectors. Tibet’s education system, controlled entirely by the Chinese and their Communist ideology, is geared to suit the needs of Chinese immigrants. Tibetan students also suffer from prohibitive and discriminatory fees and inadequate facilities in rural areas.

The deprival of meaningful education in their own homeland has forced well over 10,000 Tibetan children and youths to escape to India, where the exile Tibetan community offers them educational opportunities unimaginable in Tibet. The records of the Tibetan Reception Centre in Dharamsala reveal that from 1991 to June 2004, the Centre had hosted a total of 43,634 new arrivals from Tibet. Out of these, 59.75% were found to be children (below the age of 13) and youths (between the age of 13 and 25). In 2006 alone, some 2,445 newly-arrived Tibetans were received at the Centre, majority of them being children below 18 years of age. The sole purpose of such a large number of young Tibetans fleeing their homeland is to obtain a decent religious and secular education in a country far away from home.

The Tibetan flag and national anthem are banned. Tibetan Buddhism is seen as a threat to the occupying Chinese state and possessing Dalai Lama images or teachings can result in imprisonment and torture. Chinese officials closely monitor and control religious activity at monasteries and nunneries. Writers, singers, artists and teachers are jailed for celebrating Tibetan national identity and for any criticism of China’s rule.

Tibet is governed directly by the Chinese Communist Party in Beijing. In the Tibet Autonomous Region, no Tibetan has ever been appointed Party Secretary – the most senior government post. Ethnic Han Chinese Communist Party members hold almost all top government, police, and military positions in the Tibet Autonomous Region and other areas of Tibet.

Travel for Tibetans is restricted, with police checkpoints monitoring movement and permits required to visit ‘sensitive’ religious areas. Tibetans have no automatic right to a Chinese passport, making international travel difficult and often impossible. Tibetans who are caught trying to escape Tibet face brutality from the authorities. “Getting a passport is harder for a Tibetan than getting into heaven.”

Reporters without Borders ranked China 176 out of the 180 countries on its Press Freedom Index 2015. Professor Carole McGranahan has also stated that there are more foreign journalists in North Korea than Tibet.

During the past years, the Tibetan issue has gained increasing international attention. Tibet Support Groups have been formed in more than 40 countries. Even in schools and colleges, Students for Free Tibet has been formed to support the Tibetan issue. Parliaments of several countries have adopted resolution in support of Tibet. World Parliamentarians Conference on Tibet (WPCT) has been held twice in New Delhi and Lithuania. Many countries have called upon China to respect the Tibetan people’s fundamental rights.

BIHAR – Factors which lead to the deterioration of the State