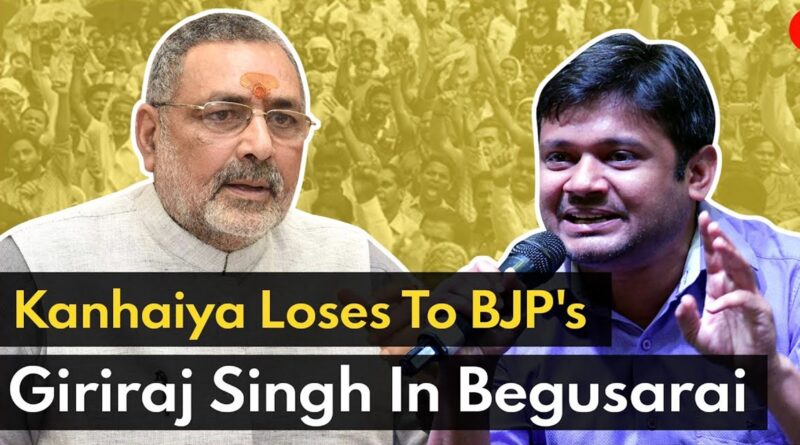 This ‘Political Article’ has been written jointly by NEEL PREET, who is a Best-Selling Author & Columnist as well as BIPIN BIHARI SAHAY, who is a Senior Engineer & Political Analyst at North South Block. Therefore, both these senior writers of our Editorial Team has jointly presented their views on the kinds of political stunts, which Kanhaiya Kumar has pulled after terribly loosing from the Begusarai’s Lok Sabha Seat (his home ground) in the 2019 General Elections to BJP’s well-known strong face, Shri Giriraj Singh.

Well, it seems that the Congress Part is not only already filled with ‘All kinds of Failed Leaders’ but also they’re very much bent to ‘Recruit even more Failures’ into their organization. Any politically aware person can easily tell that it’s failure of Leadership in the congress party, which has lead to their downfall and yet it seems that the congress has not learnt any lesson from past failures and are still ‘Outsourcing all the Failed Leaders’ from other parties. Dramebaaz-Leaders like Shatrughan Sinha, Navjot Singh Sidhu or the latest addition, Kanhiya Kumar had now joined the congress party and the world knows that the only thing similar in them is that all of them had done ‘Political Suicides’.

For the opportunity of taking away more ACs from Bihar Pradesh Congress Committee office, while leaving Congress Party might have inspired Kanhaiya Kumar to become a ‘Congressi’ for time being.

D) Who’s better for the Congress party, Rahul Gandhi or Kanhaiya Kumar: Both are worst for the nation.

E) What is the hidden agenda of Kanhaiya Kumar for joining the Congress party: Kanhaiya Kumar is a expired product, seeing no carrier in CPI, he tried his luck in Congress with a hope that the criminal cases pending against him might be diluted or delayed.

It is certain that the Congress is just a time pass Platform for him. These types of guys, who even takes away an old air conditioning unit from his original cadre party (CPI) office. I hope he might have the hidden agenda of taking away some more used air conditioning units from Sadaqat Ashram (BPCC Office).

F) What will be the impact of Kanhaiya Kumar joining the Congress party on the Congress chances in elections: Both are parasites. Their self destruction is evident, just go on watching. Finally after playing last innings of the game of ‘2024 General Parliamentary Election’, the so called Italian Maino-Gandhi Family will fly abroad along with the kids of Indian Wadra-Gandhi Family leaving the Kanhaiya Kumar.

Even Kanhaiya Kumar is knowing it very well that in the Congress he is in temporary parking only. He is also looking for other regional parties of Bihar like RJD, JD(U) etc. During 2019 general election the door of thr RJD was shut for him and even recently the JD(U) has not given him signal to join with them. Finally he (this fused bulb Kanhaiya Kumar) will be dumped in any waste bin, from where Kanhaiya Kumar will even not be recyclable.

G) How will Kanhaiya Kumar be productive for Congress: Are you making joke by asking Kanhaiya Kumar to be as productive being? He is a destructive figure only. A leftist is begging for some platform from those who opposite to their ideology and even taking away old and used air-conditioner from his own party office how can be productive on any social platform. Please do not ask such idiot questions in future too.

I) What are some interesting facts about Kanhaiya Kumar: In Patna, Kanhaiya was used to live in CPI Office, but while leaving the CPI office room Kanhaiya took the Air-Conditioner too along with his other personal luggage from that CPI Office room. This is a best example of true face/hollowness of character of a celebrity left-winger politician’s selfishness, who in public life always barks for serving to the poor people of the Bihar and the society.

J) Do you think that Kanhaiya Kumar can revive the Congress in Bihar: When a infected dog bites some one, it runs too long, before relaxing. Similarly Kanhaiya ran to Gujrat from Begusarai (Bihar). One should not forget that the Begusarai was once known as Leningrad (epicenter of Left ideology in Bihar). Similarly the Gujrat was once the epicenter of Congress ideology. But now both have crossed their expiry dates. So the readers themselves can judge about the revival of both expired items (the Congress and the Kanhaiya)

Kanhaiya is a fused bulb, but he is still in misconception with himself that he will not only revive the Congress, but will lead also. Very soon he will be dumped as a scrapped item by the veterans of the AICC. He should not forget that he is rejected piece in his home state Bihar and even in his home district (native place) Begusarai too despite campaigning by several all India level celebrities like Sabana Azmi, Swara Bhaskar like secular face beside several self styled JNU intellectuals in 2019 parliamentary election.

In addition, Kanhaiya Kumar is a big fiasco for ever. He should now quit public life and should focus on his ongoing / pending and future / probable legal course of actions / proceedings under various acts of national security. Finally it is a universal truth that every dirty drain terminates to a large filthy and fouls smelling gutter only. Similarly Kanhaiya has also fulfilled his dream that he after starting carrier as dirty drain (with leftists post broker ideology) terminated to a large filthy gutter (like Indian National Congress).