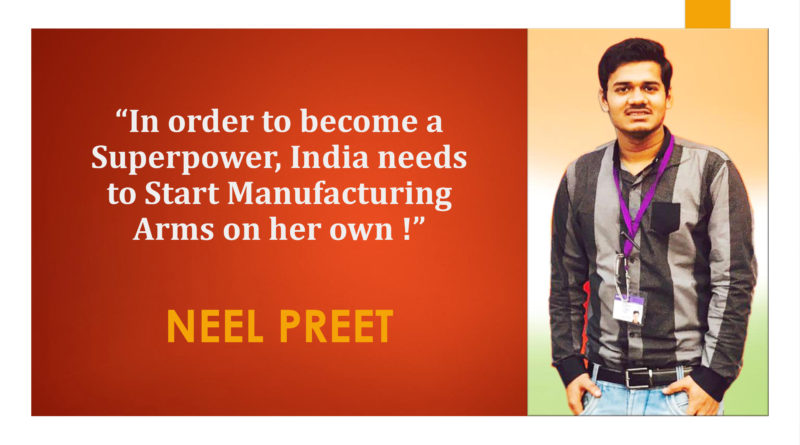 Today, we know that the Indian Armed Forces which comprises of the three professional uniformed services including the Indian Army, Indian Navy and Indian Air Force along with the additional supported forces of the Indian Coast Guard and the Paramilitary Organizations is the World’s Second Largest Military Force and World’s Largest Standing Volunteer Army with the strength of 1.4 Million Active Personnel. But what we don’t know or probably we avoid knowing is that India has constantly been the World’s Largest Importer of the Major Arms in the past 5 years, as suggested in many of the reports.

Now, in the past 5 years between 2012 to 2016, India accounted for 13% of the total global arms imports, India’s arms imports are ever increasing and this trend has gone much up in the recent years. This indeed is an alarm for India, especially when the country is allotting around 2,74,114 Crores plus the additional sum of 86,488 Crores for the Defence Capital in the Union Budget of the fiscal year 2017-18. India’s military spending averaged an annual increase of 10% during the last three years.

Despite of the continuous efforts made by India to become self-sufficient to a much higher extend in manufacturing arms, most of the attempts had repeatedly failed at many of the fronts. Unfortunately, India’s programs to encourage local arms production is not functioning well enough to serve their purpose and neither is the Defence Industry of India developed to an extend where the manufacture of the modern warfare equipment and arms can take place on the domestic soil. Moreover, India’s need to fulfill the ever-growing military requirements is leaving her no other option other than to import the warfare equipment from other countries.

India faces serious geographical threats from its nuclear-armed rivals Pakistan and China, the two nations who are putting their complete efforts to expand and develop their military and over the decades Pakistan and China had also become military counterparts to each other and are jointly conducting many military drills and deals to expand their military strength together. Now, this is an issue which India needs to consider seriously and make strategies to counter her enemies of the region and to tackle a situation like this, it becomes even more necessary for India to develop her own manufacturing of arms. This indeed would release a great deal of pressure from the Indian economy as the costs which India would be bearing to import the arms from Russia, USA, France or Israel would be saved.

Recently, when our Prime Minister Shri Narendra Modi went to Israel and finalized many arms deals, we were very happy as a nation that now our Military Force too would be equipped with all the modern warfare weapons. But we forgot to acknowledge a fact that Israel, a parliamentary democratic nation which was formed in 1948, a year after the independence of India is today very much self-sufficient in manufacturing all kinds of modern warfare equipment not only for tacking her issues with Palestine and HAMAS but also for serving the purpose of exports of arms to other big countries as such India, China and Latin American nations.

It’s high time for us to learn from a geographically small nation like Israel and start manufacturing all kinds of arms and military equipment on our own. All India need to do at this point of time to accomplish her goal of becoming militarily self-sufficient is a very strong will power along with political stability; Vision to create and set up her own Defence Industry at a extend that would lead the manufacturing on such high scale that India could not only meets her own needs but also starts exporting the military equipment and arms to the other countries; And the ultimate full-proof plans for the implementation of the vision of becoming militarily self-sufficient. This would largely contribute to the economy of India as well, creating a sound economy for the country and making India a headstrong and self-reliant nation in all true sense.