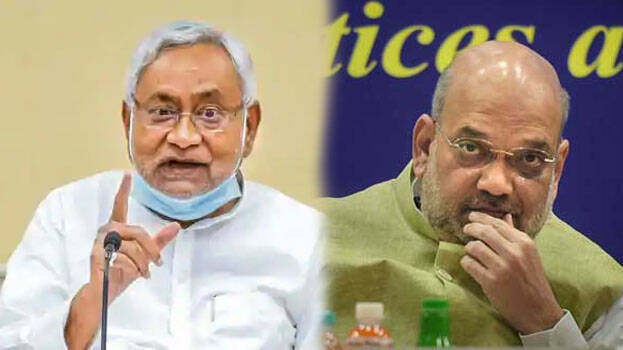 It seem that the Bihar Chief Minister, Nitish Kumar has got only one game left in his sleeves that is to ‘Play Caste-Politics and Appease the Muslims in the name of Minority Upliftment. Be it any Government Scheme or the Free-Cycle Distribution programme of Nitish Kumar only to Muslim Girls in the name of upliftment of minority community girls. It’s a wonder that only the Muslims girls got the benefit of the Free-Cycle Distribution Scheme of the state government, while the Sikh and other minority communities’ girls were excluded from this scheme, even though Nitish Kumar stated that the programme is to uplift the girls of the minority communities.

Well, for politicians like Lalu Prasad Yadav, Mulayam Singh Yadav, Akhilesh Yadav, Mamata Banerjee, Arvind Kejriwal and many more self-acclaimed secular politicians minority means just the Muslims and Nitish Kumar is also no exception to this list. Now, as it has become obvious that Self-Acclaimed secular politicians of India are giving benefits only to the Muslims in the name of minority upliftment and openly ignoring the rest of minority communities like Sikhs, Jains, Buddhists and others, so the voters of not just Bihar but all over the nation should understand this hypocrisy of these politicians and shouldn’t vote for them.

Now, the latest drama played by Bihar CM Nitish Kumar once again includes the Caste-Politics and someone like Nitish Kumar will only result in damaging the reputation of the state of Bihar and BJP, who is the bigger stakeholder in the current Bihar Government isn’t very happy too Nitish’s with caste politics. As his plan of carrying out “Caste-Wise Census” in Bihar will further damage the image of Bihar as a state, where still the ‘Caste-ism Prevails’ instead of some real development.

BJP wants to create jobs and universities in Bihar for the real development and upliftment of the state and had done so too by announcing and creating IIM and AIIMS and several other National-Level Universities in the state, while it’s alliance JD(U) is just busy with Muslim appeasement and Caste-Politics, lacking the vision for some real ground level developments like the BJP.

In the year 2005, when the BJP-JD(U) alliance formed the government in Bihar by getting full majority then many people lauded CM Nitish Kumar for the development of the state, specially with regards to the creation of Roads, Bridges and Highways but very less people knows that BJP was handling the Ministry of Road & Highways in the state during the first tenure (2005-2010) of the Nitish Government. It’s very clear that BJP wants ground level development in Bihar and is trying to do same only through the ministries handled by the BJP, after winning the 2020 Vidhan Sabha Elections in the state of Bihar!

But, the real question is that for how long can this BJP-JD(U) alliance stick together as JD(U) is known for breaking the alliance, right in the mid-term and sticking with the opposition to form the government, as it has already back-stabbed BJP in 2013, when honorable PM Narendra Modi Ji was announced BJP Prime Ministerial Candidate for 2014 Lok Sabha Elections. The whole nation is very much familiar with the jealousy that the JD(U) Chief and Bihar CM Nitish Kumar holds towards PM Narendra Modi, so if Nitish Kumar’s JD(U) will once again vote against the BJP Candidate in the upcoming 2022 Presidential Elections, then it would be no wonder.

Nitish Kumar has clearly established himself as a greedy politician who can back-stab anyone just for the sake of CM Post. Nitish Kumar owes his political carrier to BJP and specially the former BJP Leader, Shri Lal Krishna Advani Ji but he’s shameless enough to respect the Bharatiya Janta Party (BJP), who had played a pivotal role in making Nitish Kumar a known face of the politics!

Now, the BJP needs to groom a solid candidate from Bihar BJP Team in order to ensure that in the next Bihar Vidhan Sabha Elections of 2025, the CM should be from their party, when they’re clearly the bigger partner in the state government, by winning more number of seats than the JD(U) and making it possible for Nitish Kumar to take over the CM Post. Big faces like Ravi Shankar Prasad can be one of the CM Candidate and now when he’s no more holding any Ministry in the Central Government then BJP can back him and see the public’s mood much before the elections and then plan accordingly! Or someone with a strong personality like Giriraj Singh can be backed up as the CM Face for Bihar as he’s a great mass leader, who just defeated the low life thug of politics, Kanhaiya Kumar in the 2019 Lok Sabha Elections.

Another thing that goes in favor with Giriraj Singh as that he’s known for his Pro-Hindu stands and remarks, so it will give a clear message to the oppositions, who are trying to break the Hindus by diving them into Castes that now the Hindus will unitedly vote for BJP and will refuse to get divided among castes and rather call themselves Hindus as collective! Moreover, Giriraj Singh is like Shri Yogi Adityanath Ji of Bihar, as he’s known by his Hindu Identity, rather than a politician of a particular caste like Nitish and Lalu.