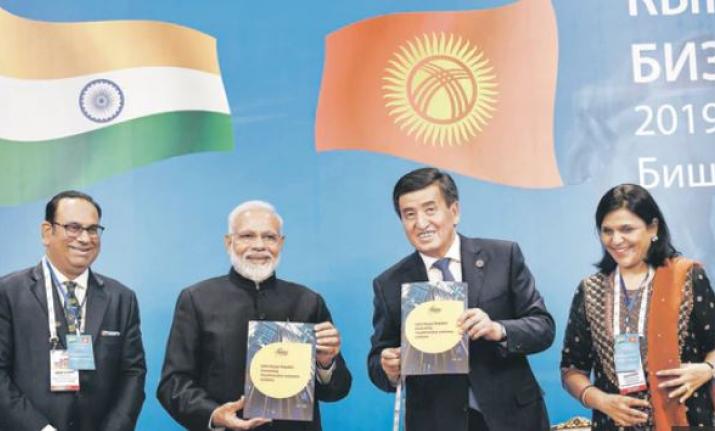 Bishkek, June 15th 2019: India and Kyrgyz Republic on Friday raised their bilateral relationship to level of a “strategic partnership” and signed a slew of agreements including on a bilateral investment treaty.

Prime Minister Narendra Modi, who attended the SCO Summit here, later held bilateral talks with Kyrgyz President Sooronbay Jeenbekov – who had come to India to attend the swearing-in of Modi for his second term – and said that there was immense scope in their bilateral relationship.

He also said that 2021 will be observed as friendship year between the two countries.

“We have agreed on a roadmap for five years on trade and economic cooperation. We will hold ‘Namaskar Eurasia’ trade show in Bishkek,” Modi said and urged Indian companies and investors to explore areas such as medicine, textiles, railway, hydro power, mining, minerals and tourism in the Central Asian country.

He also announced a $200 million concessional Line of Credit to meet development needs of the Kyrgyz Republic.

Modi also addressed the first India-Kyrgyzstan Business Forum meeting and said the world economy was transforming fast and growth of a big economy like India and its technological progress was a big factor for stability and hope in the world.

He said there were three catalysts to promote trade and investment – right atmosphere, connectivity and business-to-business exchange. Connectivity was also important to ease trade, he said, noting that Chabahar port has emerged as a new link between India and Afghanistan. “We will have to give more attention to connectivity between Central Asia and India,” he said.

Among the agreements signed were an MoU for cooperation between the National Security Council Secretariat of India and Office of the Security Council of the Kyrgyz Republic and Protocol to Amend Article 26 of India-Kyrgyzstan Double Taxation Avoidance Agreement (DTAA).