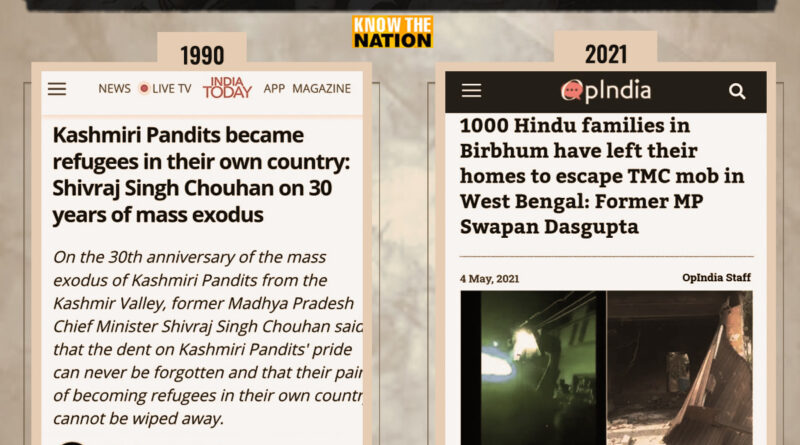 As the carnage by Trinamool Congress workers continues unabated in West Bengal, over 1000 Hindu families have reportedly been forced to leave their homes and take shelter in the fields in Birbhum district of the State.

Former Rajya Sabha MP and the BJP candidate from Tarakeswar, Swapan Dasgupta, had tweeted about the alarming situation in Birbhum on Monday (April 3). The area falls under the Nanoor Vidhan Sabha constituency. “The alarming situation in Nanoor (Birbhum district) with more than a thousand Hindu families out in the fields to escape marauding mobs seeking to take it out against BJP supporters. Reports of molestation or worse of women. Amit Shah, please rush some security to the area,” he wrote.

His tweet came in the backdrop of reports of rape and mass molestation cases from the Birbhum district of West Bengal. On Monday (May 3), the BJP informed that two of its female polling agents were gang-raped by TMC hoodlums in the Nanoor assembly constituency.

India Today reported that one of the victims of gang rape had been missing since the incident. The two female election agents were working for the Nanoor BJP candidate Tarakeswar Saha. At the same time, several female BJP workers were molested in 12 villages that fall under the Nanoor Vidhan Sabha constituency. West Bengal Police has, however, denied the report of BJP woman being raped and termed it fake without giving any explanation.

In another incident, a BJP worker named Ganesh Ghosh was compelled to flee West Bengal along with his family members after the Trinamool Congress goons wrought havoc at his resort. The miscreants attacked Ghosh’s resort in Shakuntala village in Khoai Haat in Shantinektan. The resort is located just 5 minutes away from the Vishwa Bharati University.

Several images have now surfaced on social media, which capture the extent of the damage done to the BJP worker’s property. Visuals show that the glass panes of windows and doors were broken by the miscreants. They had also damaged the furniture. Broken pieces of glass can also be seen lying scattered on the floor. Fearing a threat to his life, Ganesh Ghosh was left with no option but to leave the state altogether.