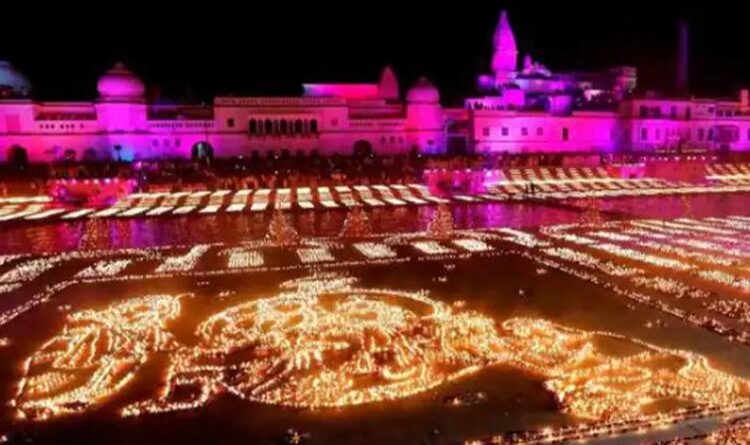 Ayodhya, November 3th 2021: With over 9 lakh diyas lit in Ayodhya along the Saryu river, another world record has been created in the land of Lord Ram. Apart from this, 3 lakh diyas (earthen lamps) were lit separately at different places in the Hindu holy city on Wednesday.

Chief Minister Yogi Adityanath, who reached Ayodhya for the fifth ‘Deepotsav’ (festival of lights) event, while inaugurating and laying the foundation stone of various projects worth Rs 661 crore, credited Prime Minister Narendra Modi for the construction of a grand Ram temple and also launched an attack on the opposition parties.

Adityanath claimed that when the Ram temple is built in Ayodhya, it will be the best religious and spiritual city in the world. He said that Ayodhya will become the cultural capital of India. “Now no one can stop the construction of a grand Ram temple in Ayodhya by 2023,” he said.

Targeting the family of the Samajwadi Party chief, Adityanath said: “Those who were firing on Ram Bhakts 31 years ago, have now bowed down to your power.” “In the next karseva, if it is held, the bullets will not be fired. Flowers will be showered on the devotees of Lord Rama and Lord Krishna.” The Chief Minister reminded the people that no one can forget what happened 31 years ago, on October 30 and November 2, 1990.

Targeting Akhilesh Yadav, Yogi said that those who loved the graveyards, used to spend public money there. Those who love Indian religion and culture, are investing money for its upliftment. In the previous governments, money was spent on building cemetry walls, today it is being spent on reconstruction and beautification of temples.

He said that the government is working for the development of 500 pilgrimage sites and temples, including Ram Janmabhoomi, Kashi Vishwanath in the state, out of which work on 300 has been completed and on another 200 is in progress.

Union Tourism and Culture Minister G. Kishan Reddy, who was also present, said that 12 lakh diyas lit in Ayodhya today is not just a record, but it’s a message of the dignity of Lord Ram to the whole world. He said that by 2030, Ayodhya will be the world’s largest religious tourism city.