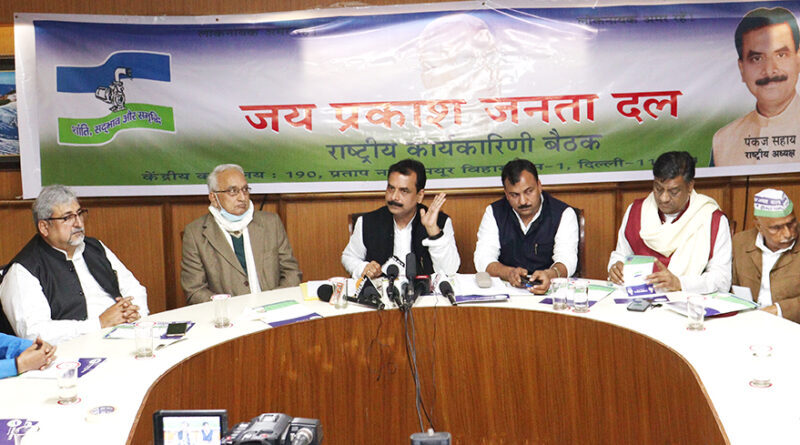 This meeting of the National Executive of Jai Prakash Janata Dal was held in Himachal Bhawan in the National Capital, under the leadership of JPJD National President Shri Pankaj Sahay. It should be noted that due to the prevailing Corona period, the party did not hold any meeting for long period of time, while now after noting the things getting back to track the party held this National Executive meeting.

In the meeting, the party expanded its New Executive by dissolving its former executive, this meeting resulted in the dismissal of Madhya Pradesh’s State President, Satyaveer Singh; National Vice-President, Achal Singh Pawar; National Secretary Dehdani S.K. Jain; Karnataka State President, Nasrullah since they all were involved in “Anti-Party Activities” and they’ve been “Expelled from the Party for a period 6 years.”

Also, in this meeting, JPJD National President Shri Pankaj Sahay told that in the coming years, Jai Prakash Janata Dal Party will expand its organization to rural level as well. In addition, Jai Prakash Janata Dal has now made its move towards becoming digital. In the coming days, the party will create its own Call-Centers in the state of Haryana, which will help the party to expand, also the general issues will be diagnosed immediately. Speaking about the youth of the country, JPJD National President said that if Jai Prakash Janata Dal will form the government then 100% employment will be linked in which IT Cells will play an important role.

A List of Party Executive Expansions is Attached Below.