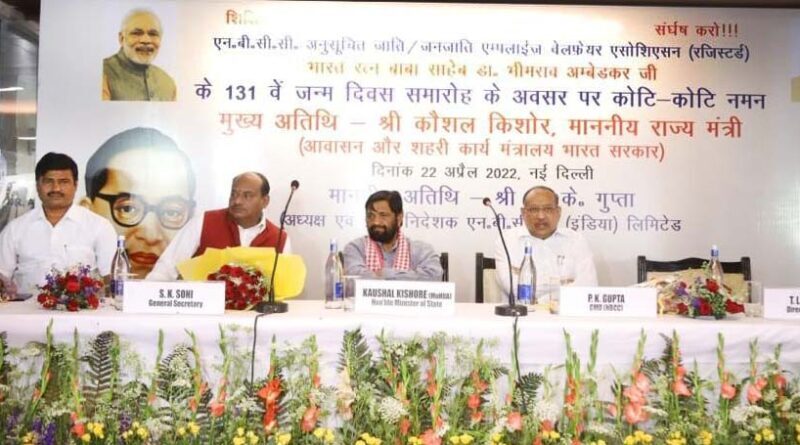 NBCC SC/ST Employees Welfare Association celebrated the 131st birth anniversary of Bharat Ratna Babasaheb Dr. Bhimrao Ambedkar. On this occasion, he mentioned the lessons learned by him throughout his life and told about his messages. Ambedkar dreamed that our country should become prosperous and educated. Hon’ble Urban Development Minister Shri Kaushal Kishor was present as the chief guest on this occasion. On the other hand, Honorable Guest Shri PK Gupta, Chairman and Managing Director (NBCC) were present and General Manager (NBCC) Shri Sudhir Kumar Soni gave his views on the distance between Management and Employees.

And keeping his point regarding the neglect of the Scheduled Castes/Scheduled Tribes workers, he drew the attention of Hon’ble Minister Shri Kaushal Kishor Ji that the management of any institution should be based on the ideas of Babasaheb, taking care of social equality and respect for their appointment and Inequality of work also needs to be taken care of. In this context, Shri Sudhir Soni Ji wanted to draw the attention of the Government of India to other issues related to this.

He said the birth anniversary of Ambedkar Sahib is also celebrated as Equality Day and Knowledge Day in the country. Ambedkar Equality Day is also celebrated in British Columbia, Canada. Ambedkar is also called the architect of the Indian Constitution. He was vehemently opposed to the caste system in the country. He also took many steps for the upliftment of Dalits. He is also called the messiah of Dalits.

Ambedkar was born on 14 April 1891 in Mhow, MP. He was a lawyer, economist, politician, and social reformer. He did a lot of work for the upliftment of women and Dalits. He was awarded the Bharat Ratna, the country’s highest civilian award. He breathed his last on 6 December 1956. The presence of many dignitaries in this function organized by NBCC SC/ST Employees Welfare Association was commendable.